Networking as an Aspiring Sports Journalist 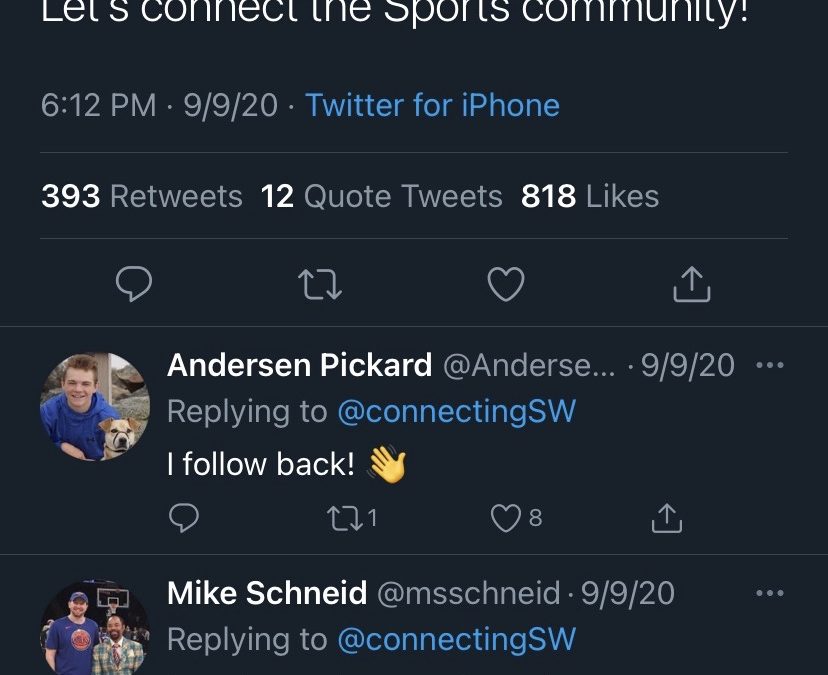 Finding a networking event during a pandemic is even harder in a job where networking would normally not be done in a formal setting.

Quite obviously, in-person networking events are not really as common anymore, because in New York State, groups of more than 25 people are not really supposed to meet in person if they don’t have to. While there have been certain ways to avoid this, like going to school or work, an in-person networking event is one of those non-essential luxuries that just can’t really be accommodated for as much as it could be normally.

While there are still networking events happening on Zoom, and limited events happening in person, it seemed like the world of sports journalists had little interest in putting on many of those events, with so much else going on. Unfortunately, part of the problem has been that during the pandemic, many sports journalism and broadcasting outlets have had to lay off employees, putting more resourceful people out of work just due to all of the changes happening in the world on the public front.

Typically, people who are interested in working in sports network themselves by making appearances as fans at actual live sporting events, and trying to network there. If one wants to be a writer, they may try to get access to the press from the press box to talk to a writer from The Athletic or the local newspaper. If they want to broadcast, trying to gain the attention of a sideline reporter to ask some questions is another common tactic. A lot of it hinges on being in the right place at the right time, and if you want to work in sports, going to a sporting event and missing out on a chance to talk to somebody working the event is not always the end of the world. Likely, I would also enjoy watching the game.

With that in mind, I knew that I needed to figure out some sort of way to network myself even though I could not find an actual networking event. With that in mind, I remembered that I used to write for an NFL blog website then called NFL Fan Blitz (they have since rebranded as PrimeTime Sports Talk or www.primetimesportstalk.com), and the editor was very active on Twitter in trying to connect the sports journalism community. He used to retweet posts all the time designed to “connect the sportswriters and broadcasters of the world” and if you liked or retweeted the post, you would usually gain a few new connections every time. So that is what I did.

The trick, also, was not just retweeting that post and waiting for people to notice, going on and actually following the people that had already done so was helpful too. I had a good conversation with somebody who does podcasts about the San Francisco 49ers named Jason, and now I’m a regular listener to his podcast. Once the Over The Boards Podcast starts back up for the upcoming NHL season, he told me to message him and he’ll give it a listen.

It was a small step, but an easy one, and it gave me a bit more confidence to reach out to a few more people just to see what would happen. Hopefully, we can get back to sporting events soon enough, and everybody can get the chance to exchange business cards in person.