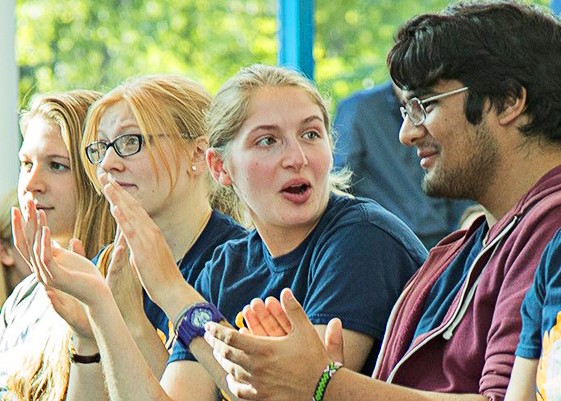 When President John J. Hurley announced that he was lowering the college’s tuition by 23 percent, the crowd packed into Science Hall, erupted into cheers and applause! More than 400 members of the campus community turned out to hear the good news Monday at 4 p.m. in the Science Hall Commons. In a bold move, President Hurley unveiled Excellence Within Reach, a new plan to reduce tuition for full-time undergraduate students from $34,966 annually to $27,000, beginning with the fall 2018 semester. The initiative is designed to make the college’s transformative Catholic, Jesuit education more accessible to all.

Relive the moment below.

The audience had the opportunity to preview the Excellence Within Reach video during the event.

The excitement continued during a news conference yesterday, Tuesday, October 3, attended by all local media outlets.

The social media buzz from students, alumni and friends of the college has been overwhelming. Check out our Twitter here. 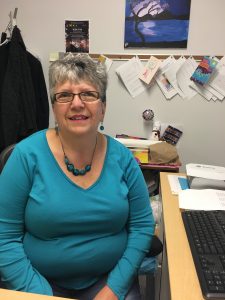 No matter what area of the college Sue Gruttadauria supports, she is able to juggle multiple responsibilities with a smile on her face.

Sue’s journey at Canisius began in 2001 in the Annual Fund Office.  She later worked in Student Advisement and Adult Academic Services before landing in her current post in the Departments of Computer Science, Mathematics, Physics and the Core Curriculum in October 2015.

Involved in many campus organizations, Sue is a recipient of the I. Joan Lorch Women and Gender Studies award for her contributions to women on campus.  A strong ally of the LGBT community, Sue supports UNITY, Campus Ministry’s Always Our Children retreats, and serves as a board member for the Buffalo Gay Men’s Chorus.

She is also proud that she has donated platelets every two weeks for the last 25 years.

Sue is a regular at Canisius events. “I love to take advantage of the variety of speakers on campus, some of which Canisius gets before other schools,” she says. In particular, she recalls Judy Shepard (Matt Shepard’s mother), Dan Savage, Dustin Lance Black and Laverne Cox.

Sue also enjoys spending time with her family, which includes her daughter, son and grandson.

Did you know…? Sue has a brown belt in Judo and competed in the Empire State Games.  Twenty years ago she competed against Colleen Rosenteel, U.S. Women’s Olympic Judo Heavy Weight. 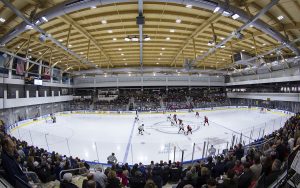 Your defending Atlantic Hockey regular season champions take to the HARBORCENTER ice Friday, October 6 when they kick off their season with an exhibition tilt against Ryerson. Face-off at the downtown rink is at 7:35 p.m.

Friday’s game will be the first of six home contests for the Griffs this month, a series of contests labeled #Hocktoberfest. Individual game and season tickets are now on sale with alumni discounts available. The full #Hocktoberfest schedule is listed below. Call 888-TIXX for your tickets.