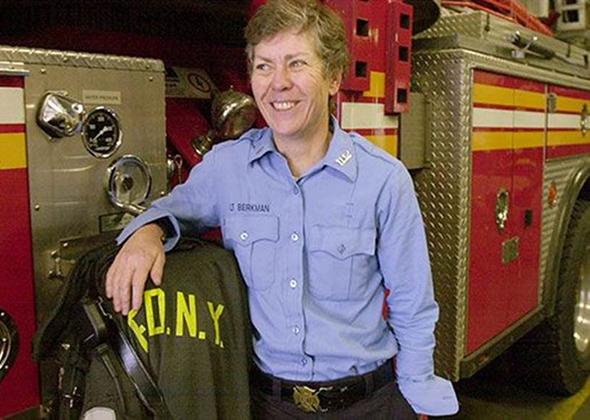 Canisius College presents Brenda Berkman, a retired captain of the New York City Fire Department, who will speak on Wednesday, March 1 from 7:30 – 8:30 p.m. in the Regis Room. The event is free and open to the public.

In 1977, the New York City Fire Department (FDNY) lifted a hiring freeze and began seeking new recruits who needed to pass a physical test in order to be considered. Of the 90 women who took the test, zero passed including Berkman, a marathon runner. Berkman, also an attorney at the time, filed and won a lawsuit against the city of New York on the basis of gender discrimination. In 1982, 40 women were hired by the New York City Fire Department as tests were changed to be more job-related.

For years afterwards, the women faced mental, physical and sexual abuse. The PBS documentary Taking the Heat: The First Women Firefighters of New York City chronicles the journey of Berkman and others in the FDNY. Berkman is a proponent that women can save lives as well as men, a controversy that still exists today.

Berkman received the Susan B. Anthony Award, which honors grassroots activists dedicated to improving the lives of women and girls in New York City, from the National Organization for Women (NOW) in 1984. In 2002, NOW also presented Berkman with the Women of Courage Award, as she was one of the first responders to the September 11 World Trade Center attacks. Berkman rose to the rank of captain and retired in 2006.