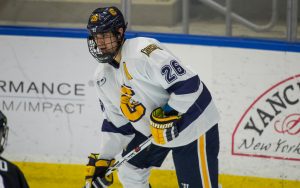 Your Golden Griffin ice hockey team defeated Niagara in its regular season finale at Dwyer Arena on Saturday, February 24 by a score of 3-2. With a record of 17-11 in the conference and 17-15-2 overall, the Griffs secured second place in the Atlantic Hockey Conference and second seed in the playoffs.

The team earned a bye in the first round and Canisius hosts the second-lowest of the remaining seeds in a best of three quarterfinal series, March 9-11 at Key Bank Arena at HARBORCENTER. Game times are as follows:

Reserved and general admission tickets are on sale at the Koessler Center box office or by calling 716-888-TIXX.

The Atlantic Hockey semifinals and finals will be held at Blue Cross Arena in Rochester, NY, March 16 and 17.