Philip Reed, PhD, associate professor of philosophy, wrote an opinion piece in the Thursday, May 19 edition of The Buffalo News. The op-ed discusses the New York Appellate Court’s decision on physician-assisted suicide. 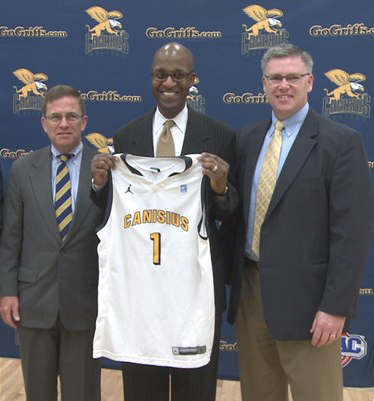 “I had the opportunity to work with Reggie for six years at the University at Buffalo,” said Canisius Athletic Director Bill Maher. “After that, I watched him recruit and develop students and grow programs. Reggie is uniquely qualified to build our program and compete for championships.”

“I thank God for the chance to come back and coach in my hometown,” added Witherspoon. “A lot of Canisius alumni live in the area and care very much about the team. I appreciate the effort that Jim Baron, the coaching staff, and the players have put into this program.

Witherspoon spent the 2015-16 season at the University of Tennessee at Chattanooga, where he was a member of Matt McCall’s coaching staff that led the Mocs to a 29-6 overall record, a Southern Conference regular-season championship, a SoCon tourney title and the school’s first NCAA Tournament appearance since 2009. Prior to his time with Chattanooga, he spent one season at Alabama under former head coach Anthony Grant, who is currently a member of the coaching staff for the NBA’s Oklahoma City Thunder. With the Crimson Tide in 2014-15, he was part of a staff that posted 19 overall wins and eight SEC victories en route to a bid to the NIT.

“At every stop in his coaching career, Reggie has been a proven winner on and off the court,” added Canisius President John J. Hurley. “In Reggie, we not only see a successful coach and recruiter, but an outstanding ambassador, role model and mentor for our student athletes.”

Witherspoon is best known in Western New York for his work building the basketball program at the University at Buffalo. A two-time Mid-American Conference (MAC) Coach of the Year (2004, 2012), he led the Bulls from 1999-2013, where he posted a career record of 198-228 in 14 seasons.

Witherspoon replaces Jim Baron, the Canisius men’s basketball coach for the past four seasons, who announced his retirement on May 20. He retires from coaching with a total of 462 career wins.

Nicki Calabrese, PhD, associate professor of teacher education, is currently in Oviedo, Spain with students who are interning as English teachers at Colegio de San Ignacio for three weeks.

The students host 65 fifth graders for a three-day English-immersion camp. However, this camp was hardly roughing it! Students are staying at a 70-room Jesuit compound in the lovely town of Celoria on the northern coast of Spain, complete with a private beach and forest. Canisius students plan the entire agenda, which is filled with creative indoor and outdoor American activities. The students are utilizing best practices by identifying target vocabulary for each activity while using props, body language and repetition to reinforce oral language skills.

Students play football on the beach, bake cupcakes complete with U.S. flag cupcake papers and play “pin the tail on the state,” among other language- rich activities. Each Canisius student was responsible for a group of nine students and each group is named after a USA state. There is lots of good-natured competition between the states! Afterwards, Canisius students are responsible for completing assessment pieces which they helped design. This internship is sponsored by the Office of Study Abroad and International Partnerships.

Faculty, staff and grad assistants who utilize a Canisius-owned Macintosh can now upgrade to El Capitan and similarly install Microsoft Office 2016 for Mac. Both items are featured in the homepage of Self Service, which can be found on one’s dock or application folder. If Self Service has not been installed, please contact Greg Rusch by email at ruschg@canisius.edu.

El Capitan can be installed through either Self Service or the App Store. It is highly recommended that users save all necessary files to an external disk or one of the many cloud storage options such as Google Drive, Dropbox, etc. prior to upgrading any operating system.

To receive the latest version of Microsoft Office for Macintosh, visit Self Service. The “one-click” installer is located on the homepage.

This summer, ITS is provisioning all faculty and staff with a Google Apps for Education account.  If you have created a Google account on your own, using your @canisius.edu address, there will be a procedure you need to perform.  Click here to see a description of this procedure.

If you would like to get this process done sooner, Mark Gallimore would be glad to help you do that.  If you haven’t created a Google account on your own using your @canisius.edu email address but would like an account that features Google Drive, YouTube or other Google Apps that are linked to your Canisius email, Mark can help with that too!

These resources will be particularly handy to have when attending our upcoming Google Apps for Education Summit on August 4 and 5!

If you have any questions or concerns, please contact Mark Gallimore at gallimom@canisius.edu.