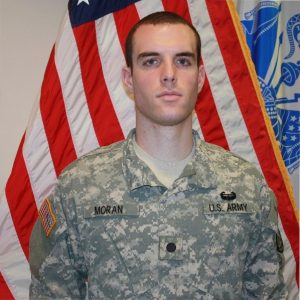 Senior physics major and Army ROTC Cadet Shane Moran was awarded the prestigious Legion of Valor Bronze Cross for Achievement ROTC Award and a $2,500 Armed Forces Communications and Electronics Association (AFCEA) scholarship. These awards are two of the top recognitions for ROTC cadets across the nation.

The Legion of Valor Bronze Cross for Achievement ROTC Award is given annually by the Legion of Valor of the United States of America. The award consists of a bronze cross and certificate, and is given to outstanding military science cadets, in their junior years, for scholastic excellence in military and academic subjects to stimulate their leadership development.

The Legion of Valor is a federally chartered corporation created to promote patriotic allegiance to the United States, fidelity to the U.S. Constitution and popular support for civil liberties and the permanence of free institutions. In June 2018, Shane was one of only nine Army ROTC Cadets across the nation awarded the Bronze Cross for Achievement out of 5,500 eligible cadets.

A physics major, Shane routinely ranks at the top of his class with a GPA of 3.95. In spring 2018 he, along with his lab partner in the advanced physics laboratory course, built a device that uses Planck’s constant in the definition of the standard kilogram.

Since joining the ROTC Program freshman year, Cadet Moran has completed the air assault course, participated in a very selective internship program in the Army’s Intelligence and Security Command and traveled to Bulgaria under the Cultural Understanding and Leadership Program (CULP). This past summer, Shane completed Army ROTC Advance Camp and earned an overall top rating. Cadet Moran is also the recipient of a 3.5 year full-tuition Army ROTC Scholarship.