Gay Liberation NOW! Exhibit in the Peter A. and Mary Lou Vogt Gallery 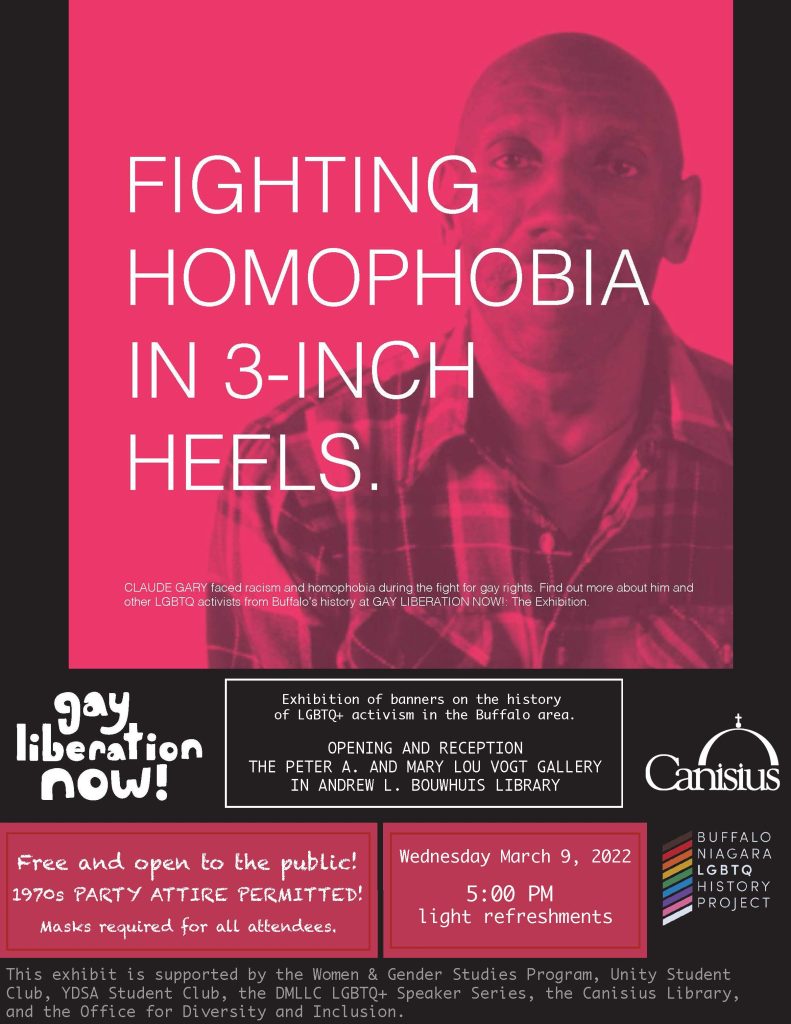 Please join ArtsCanisius, the Women and Gender Studies Program, UNITY Student Club, YDSA Student Club, the DMLLC LGBTQ+ Speaker Series, the Andrew L. Bouwhuis Library, and the Office of Diversity and Inclusion as they host the exhibit, “Gay Liberation NOW: Buffalo Mattachine and the Myth of Stonewall \” Exhibit in the Peter A. and Mary Lou Vogt Gallery in the Andrew L. Bouwhuis Library. The exhibit’s Opening Reception will occur on Wednesday, March 9, 2022 at 5:00 P.M. in the Library and is free and open to the public. There will be light refreshments. 1970s party attire is permitted. Please share the Library’s current mask policy with attendees from outside the College community.

In “Gay Liberation NOW!,” the Buffalo-Niagara LGBTQ History Project reexamines the Stonewall myth by demonstrating that a parallel movement for gay liberation developed in Buffalo during the 1960s and early ‘70s. This local movement is notable for giving the world its first gay liberation anthem, building the third largest gay community center in the US, and including transgender activists at a moment when few gay organizations did. The Buffalo-Niagara History Project’s banner exhibit tells the story of how the Mattachine Society of the Niagara Frontier (MSNF), Buffalo’s first gay rights organization, came into existence. It outlines MSNF’s; greatest accomplishments, highlights places in the city that were central to the emergence of a local gay liberation movement and introduces audiences to some of Buffalo’s most iconic gay rights activists.

The Buffalo-Niagara LGBTQ History Project is a volunteer-run organization that preserves, archives, curates, and shares local LGBTQIA+ community histories. Through these techniques, they create opportunities for civic education, intergenerational dialogue, and political action. They assert that local and regional activist histories matter as much as those that originate in large cities on the American coasts.

“Gay Liberation NOW: Buffalo Mattachine and the Myth of Stonewall ” Exhibit will be on view until March 18, 2022. For more information about this reception and the exhibit, please contact Dr. Tanya Loughead at lougheat@canisius.edu or Professor Yvonne Widenor, Director of ArtsCanisius, at widenory@canisius.edu