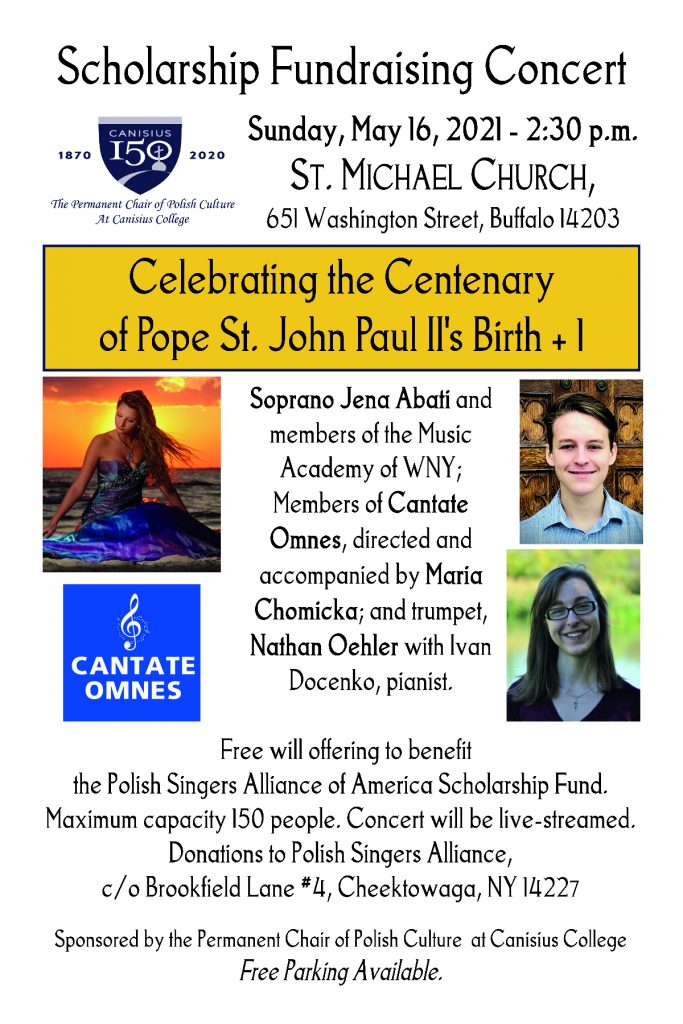 The Permanent Chair of Polish Culture at Canisius College is hosting a benefit concert at St. Michael Church, 651 Washington Street, Buffalo 14203 on Sunday, May 16, 2021 at 2:30 p.m.  The concert, originally scheduled last year to celebrate the Centenary of Pope St. John Paul II’s birth, features young artists including soprano, Jena Abati and members of the Music Academy of WNY, Maria Chomicka and members of the Cantate Omnes Choir with featured soloist, Chelsea Brodka, and trumpeter Nathan Oehler, accompanied by Ivan Docenko who will also perform.

In addition to celebrating St. John Paul’s Centenary + 1, we are happy to kick off events for the celebration of St. Michael’s 170th anniversary.  The concert benefits the Leokadja Dombroska/Polish Singers Alliance of America Scholarship Fund which has awarded scholarships to WNY artists, Emily Helenbrook, Michael Hawk, Haley Brunstad, and Anna Pascucci, among others.  Seating is limited to 150 and the concert will be live-streamed on St. Michael’s website for those hesitant or unable to attend in person.

The concert will feature classical, sacred and Polish folk music.  A collection of photos of Karol Cardinal Wojtyla’s (St. John Paul II) visits to Buffalo will be on display; and to prepare for the Polish Singers Alliance 52nd International Convention to be held in May of 2022 in Buffalo, the Cardinal Hlond trophy, a gift of the inter-war Polish Government will also be on display.  Cardinal Hlond, the former Primate of Poland, holds the distinction of being the only Cardinal to have been arrested by the Germans during WWII.  The trophy, which was recently refurbished, contains the names of the top-scoring choirs at the competition held at the Convention, a singers version of the Stanley Cup!

Off-street parking is available at St. Michael Church.  A free will offering will be accepted for the Scholarship Fund.  Checks may be made payable to the Polish Singers Alliance, a 501c3 charity and offered that day or sent ℅ 20 Brookfield Lane #4, Cheektowaga, NY 14227.