Sarah Signorino recalled her experience watching Pope Francis address a joint meeting of U.S. Congress for an article written by the Ignatian Solidarity Network. Yesterday, September 24, marked the five year anniversary that Pope Francis made history in becoming the first pope to address the U.S. Congress. Signorino, then campus minister, hosted a Pope2Watch Party at Canisius, which she recalled, “provided the campus with the opportunity to engage our Catholic, Jesuit ideas in real-time with Pope Francis’ address to Congress.”

The Jesuit Association of Student Personnel Administrators (JASPA) awarded Mark Harrington, EdD, with its 2020 Ignatian Medal for Outstanding Achievement in Jesuit Student Affairs.  Harrington is assistant vice president for student success at Canisius, director of the college’s master’s program in Higher Education and Student Affairs Administration (HESAA), and an assistant professor in the Department of Graduate Education and Leadership.  The award is given annually to an administrator who made significant accomplishments in the profession and embodies achievements within a Jesuit student affairs framework.

Since coming to Canisius in 2018, Harrington has implemented research-based, high-impact practices to better serve Canisius students; this includes implementation of a proactive model of academic support, creating student success teams for undergraduate and graduate students, adding programming and initiatives for first generation students, reviving and administering student outcomes analyses, and rethinking retention to help employ effective strategies for academic, financial and engagement student success. In addition to his role as assistant vice president, Harrington is director of the master’s program in Higher Education and Student Affairs Administration (HESAA) where he oversees all internship experiences and teaches courses related to leadership, counseling, advising, strategic planning and administration.

At the time of her visit to Canisius, Justice Ginsburg was a judge on the U.S. Court of Appeals for the D.C. Circuit and was widely regarded as a leading candidate for appointment to the Supreme Court by a Democratic president. Less than three years later, on June 22, 1993, President Bill Clinton nominated her for a position on the Court to replace retiring Associate Justice Byron White, who had delivered the first Raichle Lecture at Canisius in 1983.

In accepting the invitation to come to Canisius tendered by Professor Peter Galie, PhD, the long-time director of the Raichle Pre-Law Center, Justice Ginsburg replied that she was aware of Frank Raichle’s “extraordinary talents and accomplishments” as a leader of the Bar, and noted that the lecture series he had endowed at Canisius had been recommended by her friend and colleague on the D. C. Circuit, Judge Robert Bork, who had delivered the Raichle Lecture in 1985.

Ginsburg, accompanied by her husband Martin Ginsburg, a well-known professor of tax law at the Georgetown University Law Center, appeared at Canisius on October 4, 1990 and delivered the Raichle lecture, titled “Judicial Review for Constitutionality—United States Style” in the Grupp Fireside Lounge.

Galie recalls that when the Judge and her husband arrived in Buffalo, he asked if they had seen Niagara Falls. “They had not and I offered to take them there, mentioning the Maid of the Mist and the Cave of the Winds – soaking but exciting experiences. Marty was mute but Ruth was ready. She was nothing if not intrepid.”  And so off to the Falls they went.

Following her return to Washington, Ginsburg sent a warm thank you note for the college’s “grand hospitality and the truly VIP visit to the Falls.”  In a P.S. to her letter, which is in the Raichle Center archives, Ginsberg asked for additional copies of the lecture brochures, noting laconically that the ones she had carried home “are a bit water-logged from the Maid of the Mist and Cave of the Winds.”

Since its inception in 1983, six members of the U.S. Supreme Court have delivered lectures at Canisius under its auspices, beginning with Justice White and later including, in addition to Justice (then Judge) Ginsburg, Associate Justices Scalia and O’Connor and Chief Justices William H. Rehnquist and the current Chief Justice, John Roberts.

Help support the Canisius Blue & Gold Fund by signing up for the #GoldenVirtual5K, presented by Independent Health. 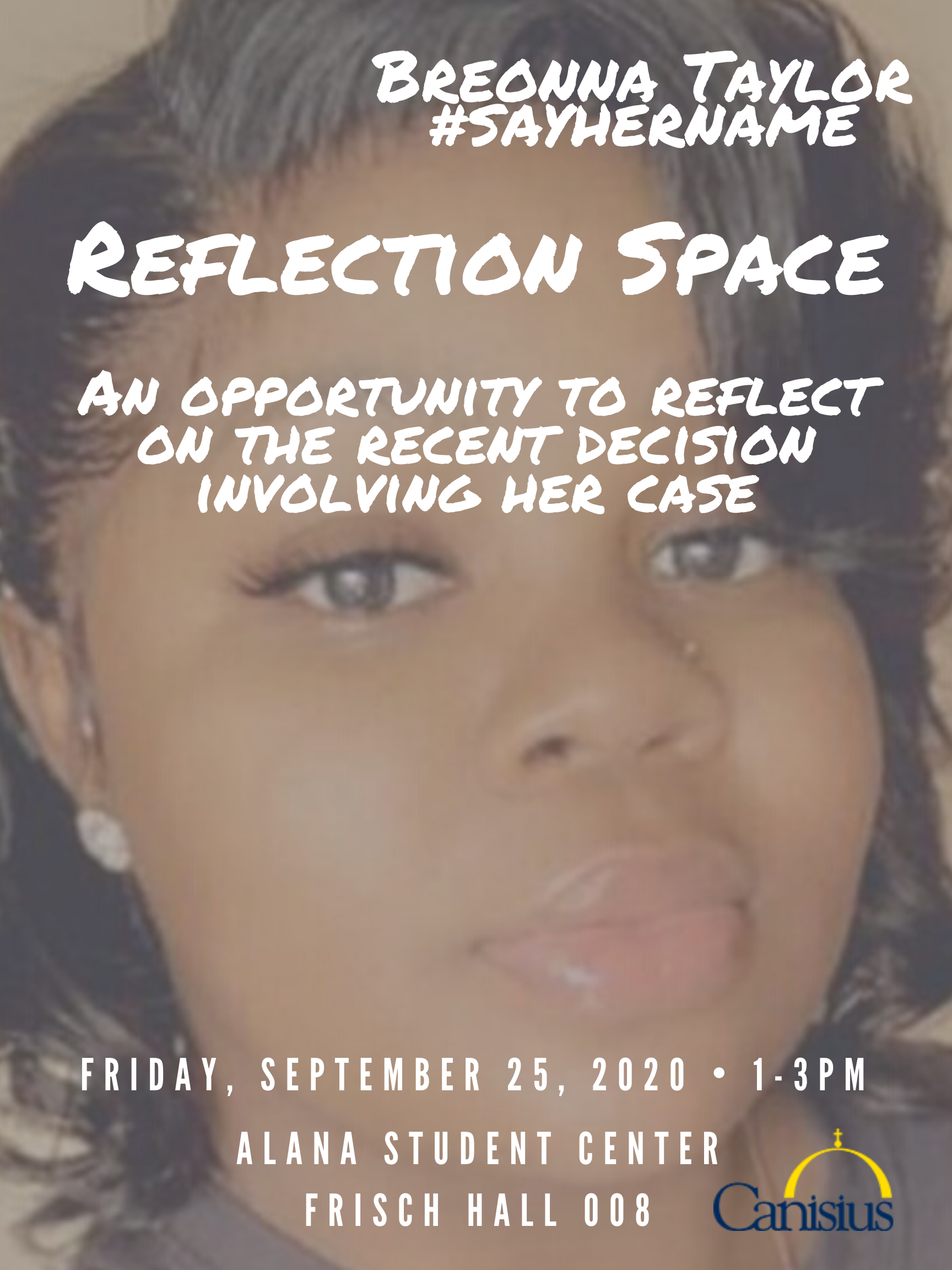 This past Wednesday, there were significant developments in the case involving the death of Breonna Taylor. Taylor was fatally shot on March 13, 2020 in her home by three police officers. At the time of her death, Taylor was just 26 years old.

The ALANA Student Center will be holding a space for students to process these recent developments, ask questions and become aware of the most recent and accurate information regarding this decision. Feel free to stop by the office located in the lower level of Frisch Hall (Room 008) on Friday, September 25 between 1:00-3:00 p.m. for some refreshments, an opportunity to reflect and some important conversations.

Please contact Bennie Williams, assistant dean of students, at willi100@canisius.edu with any questions or concerns.