“In 2016, there was an exhibit of a small collection of Elizabeth Leader’s “Discarded Ancestors” collages in the Peter A. and Mary Lou Vogt Gallery at the Andrew L. Bouwhuis SJ, Library at Canisius College in Buffalo, New York.” 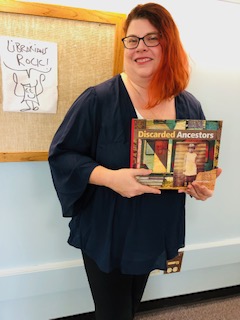 That’s how reference librarian Lisa Sullivan’s forward starts in Leader’s newly published book, Discarded Ancestors. This is a story of how an artist and a librarian, through a chance introduction, began discovering Eleanor – a woman known only through a photo album “tossed to the curb in front of a decaying house” found while the artist was walking on Buffalo’s East Side. What emerged is a story full of immigrant Buffalo and love.

Elizabeth “Betty” Leader, a mixed media artist, found that photo album. Intrigued by the seeming lack of care for the photographic legacies, she was determined to preserve these discarded ancestors in some form.

Leader says she recognized the universality of almost anyone’s family in those photos. Then, using a collection of graffiti, bits and pieces of other found objects and the photographs, she created her collages.

They became her attempt to “bring the past and present together to honor the people…as part of my art rather than discarded in trash.”

At the invitation of Fine Arts Instructor Maria Pabico LaRotonda, Betty Leader displayed some of the collages in the ALB Library’s Vogt Gallery. During the opening reception, Leader had a conversation with Archivist and Special Collections Librarian Kathleen DeLaney. The artist expressed sadness that she knew nothing of the people who inhabited the photos. She hoped someone might recognize them. One woman’s image appeared throughout the album. Perhaps the person who may have compiled the album? Where was she, now? “We talked about where Betty found the album,” says Kathleen. ”I knew that Lisa Sullivan was doing family genealogy on the East Side, and had several contacts with others doing the same thing. Many of those folks knew the streets and the families who once lived there. Lisa might have some tips to share with Betty.” An introduction, a loan of the original photo album, and Lisa and Betty became partners in solving the mystery of a woman called Eleanor by noticing – the surname “Weinzierl” written on a Fotomat envelope.

Lisa used her professional librarian skills and great interest in genealogy to trace an obituary, the family name, burial sites, and discovered that there were no descendants other than a few cousins to keep the family photos. The leads she followed proved important in finding more about Eleanor. The Weinzierl family lives emerged in a timeline dating from 1888. They wandered among residential and commercial streets that include Buffalo’s East and West Sides. Rich in German and Italian immigrant traditions, the family is traced through jobs in breweries, rubber plants, hospitals and even a library. Parties, sacraments and war all show up in records found in databases and documents. Theirs are the extraordinary everyday stories and lives of immigrant Buffalonians.

Discarded Ancestors by Elizabeth Leader with forward by Lisa Sullivan is available through New Idea Press, A Buffalo Heritage Imprint.