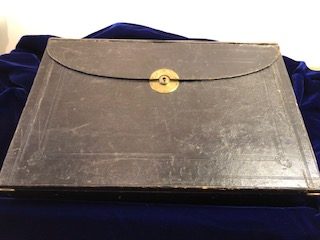 You can have your photo taken at a former U.S. President’s actual desk today, Friday, September 13. Here’s how: join us for the Fall Archives Speaker Series in the Andrew L. Bouwhuis, S.J. Library at 4 p.m. In his talk, “Alexander von Humboldt at 250 & Canisius College at 150: Impact, Influence and Longevity in the City by the Lake,” guest speaker Stephen J. Vermette, PhD, professor of geography and planning at Buffalo State College, will explore what it was like in Buffalo and around the world on the eve of Canisius’ founding. He’ll revisit a Buffalo celebration held on September 14, 1869. U.S. President Millard Fillmore was the keynote speaker at the main event, described as taking “no second place in the history of great celebrations.” What makes this designation more surprising is that the honoree never set foot in the city of Buffalo, and in fact, was deceased.

What kind of person could cause this kind of celebration? Alexander von Humboldt. This German scientist, born September 14, 1769, may have more things named in his honor around the world than anyone else. Humboldt formed “the hidden foundation of many of our natural sciences.” Among his accomplishments: linking altitude sickness with thin air at high altitudes, recognizing “Continental Drift” that Africa and North America were once joined, and recognition of the delicate connection between human activity and nature. He was a pioneer of data visualization and spoke out on the contradiction of the existence of the evils of slavery in a democracy.

As Humboldt’s centenary approached, Buffalo’s German Jesuits were organizing the founding of Canisius College. German immigrants made up almost half the city’s population at the time and were the chief organizers of the Humboldt Centenary event. The young sons of those immigrants would become the earliest students at Canisius College when it opened in 1870. Humboldt and his work continue to fascinate scientists into the 21st century.

As a special feature at this the Archives Speaker Series, we will display President Millard Fillmore’s actual lap desk, which was a gift to Canisius from Thomas C. Mack from the Class of 1961. It will be available for photo-ops.

Strudel and cider will be served. The event is free and open to the public. For more information contact, Kathleen DeLaney, archivist and special collections librarian, at Ext. 8421.