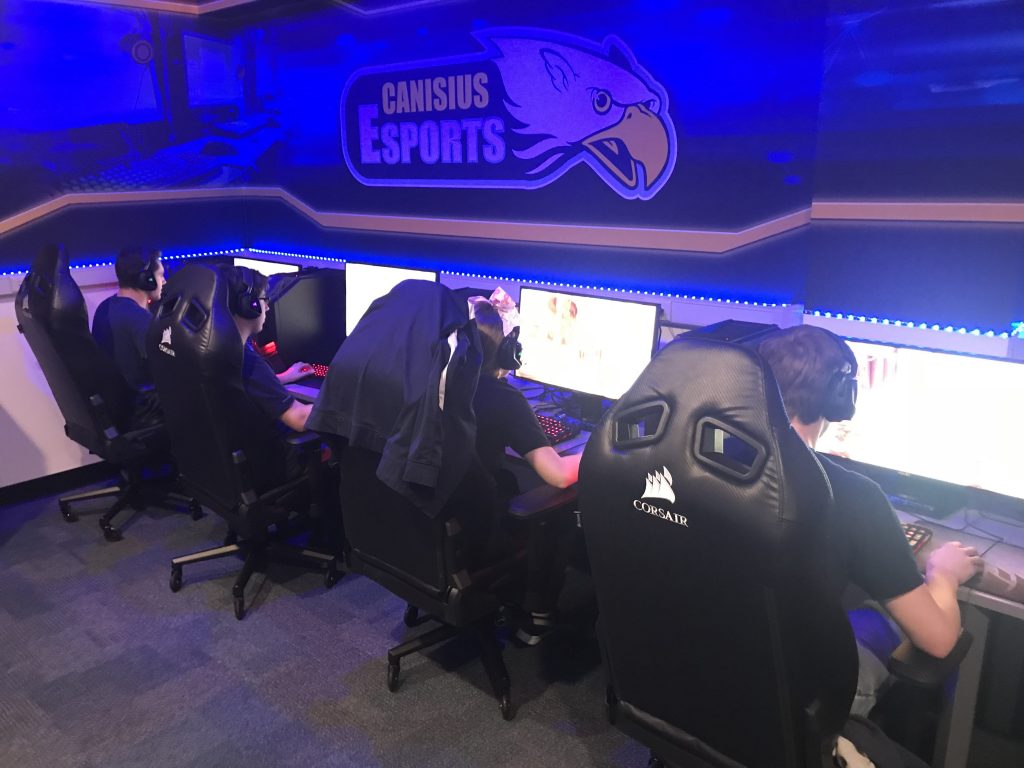 Channel 7 morning reporter Thuy Lan Nguyen visited campus before dawn today, October 24, broadcasting from the college’s new Esports lab.  Justin Rogers, director of undergraduate admissions and Kiernan Ensor, the college’s MAAC consultant, were on hand for interviews. Several members of the Golden Griffin Esports team also showed up at 4:30 a.m. to get the lab up and running and teaming with activity.   You can check out Channel 7’s coverage on YouTube by clicking here and here. Also, watch Twitter and Instagram for more posts about the story.

Unveiled earlier this fall, the Esports lab houses the college’s newest club sport – a competitive form of computer gaming.  The game room, outfitted with 12 top of the line PCs and new Xbox, Nintendo Switch and PS4 gaming consoles, is located in the basement of the Palisano Pavilion.

Currently 40 students participate on Canisius’ Esports team which is sanctioned by the Eastern College Athletic Conference (ECAC). Players vie for titles in games including League of Legends, FIFA, Fortnite and Supermash Bros., and compete against collegiate opponents that include MAAC rivals Quinnipiac, Siena College, Marist College and Iona.

Canisius is one of approximately 1,000 colleges and universities, nationwide, to launch an Esports program since Esports came into existence in 2014.

The college’s team is currently ranked in second place in Fortnite out of 8 schools in the Northeast. The college’s Esports team also competes in Overwatch, FIFA, and League of Legends. The team heads to Albany in March for ECAC competition.  Follow the latest news and match results follow @GriffsEsports on Twitter.

Read more about the gaming center and its offerings here.