Griffs face off against A-I-C 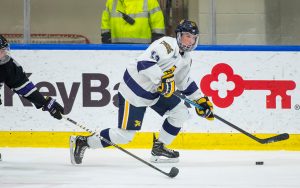 Playoff hockey comes to Buffalo this weekend as your Canisius Golden Griffins host the A-I-C Yellow Jackets in a best of three series at HARBORCENTER. Game times are Friday, March 9 at 7:35 p.m., Saturday, March 10 at 8:05 p.m. and Sunday, March 11 at 7:05 p.m. (if necessary).

The Student Records and Financial Services Office presents the “Importance of Building Personal Credit” on Monday, March 12 from 6 – 7 p.m. in OM 403.

The session will include information on credit reports and scores, plus resources to help attendees improve their own credit.

The session is free and open to all Canisius students and staff.  Pre-registration is not required. 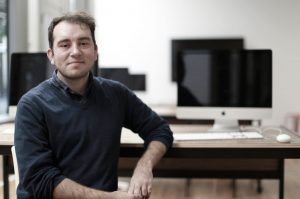 The Digital Humanities Speaker Series is honored to have Ekrem Serdar, curator at the Squeaky Wheel Film & Media Art Center, speak at Canisius College on Thursday, March 15 at 4:00 p.m. in Lyons Hall 418.

In this presentation, entitled “Critical Mass: The Building of Community Through Screen-Based Art,” Serdar will briefly introduce Squeaky Wheel Film & Media Art Center’s recent exhibition efforts, highlighting work by Sondra Perry, Angela Washko, and belit sağ, while looking at how we can treat these events as moments of research, long after the curtains come down and the screens dim.

At Squeaky Wheel, Serdar is responsible for the organization’s exhibitions, public programming and artist residencies. Previously, he was a programmer with Experimental Response Cinema (Austin, TX) which he co-founded. He is the recipient of a Curatorial Fellowship from the Andy Warhol Foundation for the Visual Arts (2017). Serdar is an advisory member of Experimental Response Cinema, and the FOL Cinema Society (Istanbul). His writing has appeared in The Brooklyn Rail, Millennium Film Journal, INCITE: Journal of Experimental Media, 5harfliler, among others. He completed his BA in Critical Studies, and his M.F.A in Media Arts Production at the Department of Media Study at SUNY Buffalo. Serdar is a native of Ankara, Turkey.

Please join us for this special event! 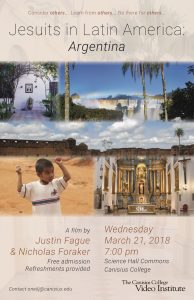 The Canisius College Video Institute premieres a new documentary on Wednesday, March 21 at 7 p.m. in the Science Hall Commons. The event is free and open to the public with refreshments to follow.

“Jesuits in Latin America: Argentina” is a student-created film that follows the Jesuit missions in Argentina. The student filmmakers visited several estancias to learn about the evolving view of the Jesuit mission since Pope Francis became the leader of the Catholic Church.

“Jesuits in Latin America: Argentina” was produced by Nicholas Foraker ’18 and Justin Fague ’19. The two students traveled for two weeks to Cordoba, Igazu Falls, Buenos Aires and Paraguay to shoot footage for the documentary.

The Canisius College Video Institute provides students with opportunities to put their classroom lessons to work on projects that enrich their learning and benefit the greater community. Students produce social documentaries and service-oriented videos – all connected by the theme of social justice – to promote discourse on ethical, social and cultural issues relevant to the world today.