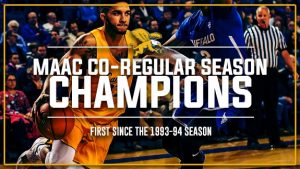 The Canisius men’s basketball team beat Marist by a score of 98-74 Sunday afternoon in the regular-season finale in the Koessler Athletic Center. With the win, coupled with Rider’s win over Iona, Canisius earned a share of the 2017-18 MAAC regular-season championship, the program’s first since 1993-94. Canisius will return to action on Friday, March 2. The team plays the winner of the Quinnipiac-Siena game at 9:30 p.m. in the second quarterfinal contest of the 2018 MAAC Basketball Championship in Times Union Center in Albany, NY. The game will be broadcast live on ESPN3, with the radio broadcasts available on Buffalo’s WECK 1230-AM and 102.9-FM, GoGriffs.com and the TUNEIN app.