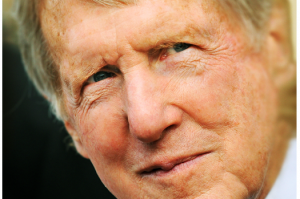 President John Hurley and a select number of community leaders including Jeremy Jacobs, Howard Zemsky, Robert Gioia, Sen. Charles Schumer and U.S. Rep. Brian Higgins were featured in a touching video tribute to the late M&T Bank CEO Robert Wilmers, whose memory and contributions to the community were celebrated earlier this week at Kleinhans Music Hall.

Nearly 1,500 people attended the memorial service that celebrated Wilmers’ life and highlighted the tremendous difference he made in Western New York since becoming M&T’s largest shareholder in the early 1980s. Wilmers, who passed away unexpectedly in December, was a generous donor to Canisius and a good friend of the college. Canisius bestowed an honorary degree upon Wilmers in 1988, and the college’s Board of Regents named him a Distinguished Citizen in 1996.