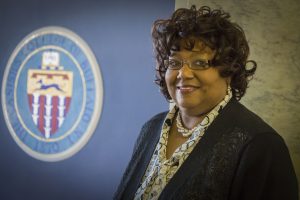 The Higher Education Opportunity Program (HEOP) recognized Lilly-Adams Dudley, associate dean and director of COPE, for more than 40 years of service at its statewide conference held in Verona, NY, November 1-3.

Adams-Dudley, who also delivered the keynote address at the event, is currently the most senior HEOP professional staff person in New York State.

She began her career in HEOP at the college in January 1975 as a language arts specialist in the COPE Office. Adams-Dudley was promoted to assistant director in 1977 and later to director in 1980.  She is one of the founding members of the Conference on Minority Affairs in Jesuit Colleges and Universities.

In 1994, Adams-Dudley wrote and won a federal TRIO grant (Talent Search) and has directed that grant since then, along with HEOP and the Martin Luther King (MLK) Scholarship. She also directed two GEAR-UP grants as well as the Liberty Partnership Grant during her tenure at Canisius.

A member of the Canisius Class of 1972, she was accepted into the very first class of MLK Scholarship winners when it was a full academic scholarship for students of color from Buffalo inner city schools who met Canisius College criteria for regular admissions. Adams-Dudley went on to obtain her master’s degree in education in 1976 and a master’s degree in educational administration in 1984.