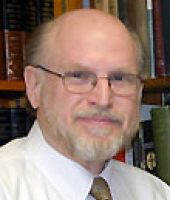 “What I enjoy most about teaching classics at Canisius is the opportunity I have to talk with students one-on-one or in small groups outside of class, to find out how smart and interesting they are and, at least in my case, to allow them to get a look at a subspecies of academic that may soon be extinct. Someday they can tell their children, ‘Hey, I actually saw one of them once.’” – Thomas Banchich, PhD

Tom Banchich, chair of the Classics Department and professor of classics and history, has taught at Canisius since 1981. Before entering the PhD program in classics at what then was SUNY at Buffalo, he received BA and MA degrees in history from Bowling Green State University, where he met his wife, Sue. Both of their sons, Andrew and David, are Canisius alumni.

A native of Oak Harbor, OH, Tom finished his final two years of high school in Chambersburg, PA. His path to classics was hardly straight. He was a feature writer and assistant sports editor for the Chambersburg newspaper, Public Opinion, during which time he played a marginal role in coverage of what then was the largest manhunt in U.S. history. The paper’s reporting of the event resulted in a 1967 Pulitzer Prize.

For two summers he worked on the boardwalk at Seaside Heights, NJ and for several years was in charge of trade books at a Bowling Green bookstore. His graduate work in Buffalo allowed him to study with some of the foremost classical scholars in the world and to be at the right place at the right time when a position opened at Canisius. He counts himself lucky to be a member of two departments comprised of excellent teachers and of scholars whose publications have merited national and international recognition. His courses encompass a broad range of subjects that span languages, literature, history, philosophy and religion.

Did you know…Tom’s scholarly publications number around 100. His most recent book, The Lost History of Peter the Patrician, was published in 2015.