Fernanda Astiz, Phd, professor of adolescence education, wrote an opinion piece in the Sunday, May 22 edition of The Buffalo News. The op-ed discusses Buffalo’s low-performing schools.

The Class of 2016 joined the ranks of Canisius College alumni, following graduate and undergraduate commencement ceremonies on May 18 and May 20, respectively. The pomp and circumstance of the week was accompanied by the emotion and pride of the nearly 1,300 newly-minted graduates, their families, and Canisius faculty and staff.

During his commencement address, Father Martin explained to students that their “deepest desires are God’s desire’s for them” and encouraged them to “listen to where God speaks to you.” He also implored students not to give the negative voices of others power. Instead, Father Martin said, listen to the voices who say “have hope, things can change and you can get through this.” Father Martin concluded his address telling students they deserve to be happy. “Not only because you are beloved children of God but because you’re something really, really special: Canisius graduates … and as Jesus said, Go Griffins.”

The Canisius Classes of 1956 and 1966 commemorated their 50- and 60-year reunions, respectively, during undergraduate commencement ceremonies this year. Among these Jubilarians was Lt. Col. (Ret.) Richard J. Herrmann. Herrmann was a member of the Canisius ROTC program while an undergraduate at the college.  His plans to graduate with his class were disrupted, however, when Herrmann was called upon to serve active duty abroad.  A half-century later, President John J. Hurley conferred a Canisius diploma upon Herrmann during undergraduate commencement ceremonies.  In doing so, President Hurley recognized Herrmann and all the other Canisius students whose service to the country prevented them from enjoying a great moment of accomplishment.

Also included in the group of Jubilarians participating in Commencement 2016 were three of the first female students to enroll in the academic day division at Canisius.

In addition to graduation ceremonies, Commencement 2016 included a Baccalaureate Mass for graduating seniors and their families. Students assist in the planning and participation of this special Mass, which is celebrated by Bishop Richard J. Malone of the Roman Catholic Diocese of Buffalo.

Enjoy more from Commencement 2016 by clicking the links below.

View photos from the ROTC Commissioning

We have always been aware of how fortunate Canisius is to have loyal donors. In order to ensure continued support, please forward any donations that are received by your department to Advancement Services, AG-202, attention: Katie Huck before May 31, 2016. This is an ongoing policy and we would like to ensure they are recorded in the correct fiscal year that they are received, unless otherwise noted.

If you have any questions please call Katie Huck, director, advancement services, at Ext. 8211 or by email at huckk@canisius.edu. 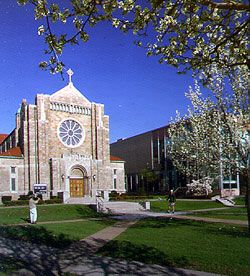 No Mass will be held on Monday, May 30 as the college is closed for the Memorial Day holiday.

Sunday Mass will continue through the summer and is held at 11:30 a.m. Please check The Dome for further notification of Mass schedules and a special event to celebrate St. Ignatius Loyola.

In order to perform upgrades to the wireless controllers, the campus wireless internet (WiFi) will be unavailable on Saturday, May 28 from 5:00 p.m. to 8:00 p.m.