November Newsletter from the President 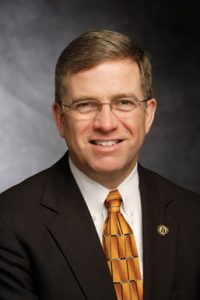 I hope that the Thanksgiving holidays were peaceful and enjoyable for you and your families.

Prior to the holiday, Canisius College was in the national news because of the GoFundMe page started on behalf of one of our student athletes, Emily Scheck, by one of her teammates, Grace Hausladen. Emily’s story struck a chord with so many of us because, to be honest, we would like to believe that love and acceptance for all, regardless of sexual orientation or gender identity, is a given. Her story reminded us that the pathway to acceptance, love and tolerance remains a difficult one for many.

Canisius College was and is supportive of Emily. Our staff in Athletics and Student Affairs have been exercising the cura personalis that characterizes Jesuit education. I am grateful that the NCAA chose to reverse its initial decision and rule that Emily remains eligible to compete in cross country and track. I was touched, as were so many others, at the outpouring of support for Emily. I wish Emily the best as she moves forward with her life at Canisius.

As the national media was bombarding the college’s communications staff for comments about Emily’s case, we fielded the following question from a producer at ABC News:

“I was also wondering what is the school’s response to critics who find it controversial or contradicting for a Catholic college to continue to support a lesbian athlete.”

Best wishes to all of our students for a successful conclusion to the fall semester.