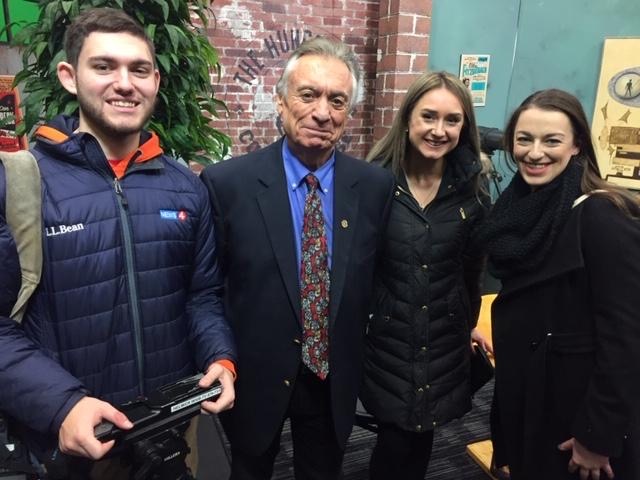 Hello everyone! My name is Bridget Brogan and I am a junior from Syracuse, NY (shoutout to my 315 homies) and am double-majoring in Communication Studies and Journalism.

This semester I am interning at News 4 Buffalo (WIVB) as their Newsroom Intern! So far I have two days beneath my belt and am having a BLAST! I’m not going to lie, I was super nervous going into my first day last week which, for me, translates into “I have no idea what to wear”! After some style input from my roommates, a near emergency trip to Marshall’s, and about six outfit changes, I was ready for my first day!

Day One: After I walked into the news station, I was almost immediately introduced to the news director and then swiftly assigned to a news reporter who was about to head out in the field and shoot live shots for the evening newscasts. I was at the station for approximately 20 minutes before I was already en route to observe my first live shot (not in studio)! The story being covered was about a pedestrian who was struck by a vehicle on Sheridan Drive so therefore the reporter, photographer, and I were setting up live shots near where the accident occurred.

We were reporting live from Sheridan Drive for approximately 2-2 ½ hours which meant there was a lot of unexpected down time on my end. However, between each newscast I got to sit with the news reporter and photographer, more specially sit in the car because it was 10 degrees outside, and pick their brains about everything! There was even an impromptu trip to Starbucks in between takes!

By the time we were done shooting and arrived back at the station, I only had about an hour and a half left in my day but I was able to sit with the photographer I went out in the field with, observed as he edited packages, and got to talk with him on finding a job as a recent graduate of college! All in all, day one was a success!

Day Two: Unlike my first day, when I arrived at the station I was not met with the stressful urgency that filled the news station prior but instead a very calm and relaxing workspace. On this day, the news director had me sit in on the afternoon news briefing which consists of dishing out stories to reporters and coming up with news stories. Being that it was a slow news day, there wasn’t much to cover besides a local connection to Kobe Bryant and a few other minor events.

After the meeting was dismissed, I went out with a different reporter than on my first day where we were to interview a former helicopter pilot who flew in the region where Kobe Bryant’s helicopter crashed several times. As it turns out, this man actually knew Kobe Bryant AND he was the photographer responsible for capture OJ Simpson’s infamous white Bronco car chase from the air!

Towards the end of the interview, the reporter let me ask a few questions and so of course I was geeking out (only in my head though)!! After the interview was finished, we enjoyed another impromptu Starbucks run which assisted in getting me through the rest of the news day. Since not much was happening, and the IT consultant for the news station was on vacation and therefore could not log me into any of the computer systems, the day mainly consisted of chatting with multiple producers, reporters, photographers, and even a Meteorologist!

However, the end of my night consisted of a typically intern task: Picking up food from Jim’s Steak Out for everyone back at the station. Although a minor task, the sheer joy on people’s faces when I came back with dinner was priceless! Day two was definitely a win!

Although two days at an internship is not much, I am eager to learn as much as I possibly can and eventually begin some of my intern duties such as answering phones, researching story ideas, etc. once the IT guy returns from vacation.