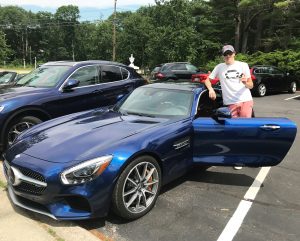 I cannot believe that it is already August. It has been one of the most eventful summers for me in recent memory, and certainly the most substantial in terms of career building. My connection with the New England Motor Press Association (NEMPA) at the start of my internship solidified success and fun throughout my time in Boston. I was able to attend two amazing events with NEMPA including their annual ‘Ragtop Ramble’.

The Ramble is an organized drive with approximately 25 press cars from Brookline, Massachusetts to Kennebunkport, Maine. Journalists and PR representatives gather and blindly reach into a black bag with a set of keys from each vehicle. I drew a 2016 Mazda Miata RF for the first half of the drive, and in the right seat sat Neil Dunlop the Product & Technology Communications Manager at Kia. I dropped the folding hardtop and we took off for the rest stop at the midway point. The true test came at the rest stop when it was time to trade cars with the other journalists. The Miata was far from the least desirable of the bunch, but with supercars in the $200K range present I had to fire off some strong lines to upgrade from a $30K convertible. After a five-way trade I found myself clutching the key to a 2017 Mercedes AMG GT S. It was the trade of the century, and with a bit of disbelief I threw myself into the low-slung grand tourer, looked at Neil, smiled, and took off for Maine. With a sticker price north of $165,000 and more than 500 horsepower under the hood I was completely spoiled, and the smile never left my face. The beautiful blue rocket ship sounds fantastic, is stunning to look at, and provides brain-scrambling performance when you stab the right pedal. If all of that wasn’t enough to satisfy, I feasted on fresh lobster and blueberry pie for lunch at the finish line in Maine. What a day.

So clearly that day was the peak of my internship with Boston.com –but the rest wasn’t half bad. Most of my time has been spent building stories in WordPress, pitching ideas for new stories, and managing the Instagram account. My social media success has increased tremendously since May and I have received compliments from my superiors in regards to my creativity with the platform. Writing for a website with as much traffic as Boston.com has been a huge confidence booster. A handful of my stories have seen traffic has high as 50,000 clicks and I recently wrote a pre-write for a Facebook Live video that has been viewed over 95,000 times.

Networking has been a huge benefit to spending my summer in Boston, especially the connections that I have gained through NEMPA. John Paul, the president of NEMPA has been an amazing resource and mentor to me. He encouraged me to apply to be a member of IMPA (International Motor Press Association) and I just received my acceptance phone call last week. The benefits to being part of such an amazing, established organization will play out in the future–this October to be exact. The annual road and track testing session takes place over a two day period in October and is host to around 75 of the newest cars in the industry. I am optimistic about attending, from what I’ve heard it is a blast.

Constantly asking questions, meeting new people, and repeatedly reading and writing new material has taken me to new heights over the last three months. Working 40 hours per week is an experience in itself…. Most of the summer hasn’t really felt like ‘break’ and I’ve gotten a good taste of what the “grown-ups” deal with, but I know that I will look back on this summer as one filled with progress, experience, and thrilling sports cars.